The film “Godzilla Resurgence” has drawn over 5 million viewers since its release in late July, earning almost $80 million in profits. In Toho Pictures’ 29th Godzilla feature, the “king of the monsters” ravages Tokyo with its powerful tail and radioactive purple lasers, destroying entire neighborhoods and throwing the city into a state of panic. Eschewing romance and other popular movie themes, the film offers a supposedly realistic portrayal of how the government would handle such a disaster.

Since the release of “Godzilla Resurgence,” many critiques analyzing different aspects of the film have been published online. A former ASDF pilot posted a blog entry looking into whether the SDF could be mobilized to “combat a mysterious creature” under the existing legal framework, while a business consultant “fact-checked” the movie’s depiction of the government’s swift procurement of massive amounts of chemicals from factories across the country to produce coolant to freeze the monster. Former Chief Cabinet Secretary Edano, who handled the 3/11 triple disaster at the Kantei, even offered his take on the satirical depiction of the government’s indecision and red-taping. The rancorous online debate shows that the film is not only entertaining as a sociopolitical thriller, but has also provoked examination of such subthemes as nuclear energy, political decision-making, and the nation’s reliance on the U.S.

The Godzilla series has always addressed the underlying theme of coping with crises. The first movie was set in 1954

against the backdrop of a nation still reeling from the devastation of WWII and frightened of a looming nuclear holocaust at the height of the Cold War. “Godzilla Resurgence” is no exception. The new monster that emerges from Tokyo Bay is the product of nuclear waste dumped by the U.S. and other nations into the Pacific. The mammoth creature releases destructive energy through atomic fission, ramming through a Tokyo suburb before heading for the nation’s capital. Residents scramble to evacuate, hoping in vain that the government and the SDF will be able to repel the monster. The areas destroyed by Godzilla become contaminated with radiation and thus inhabitable. The scenes are reminiscent of the powerlessness that enveloped the nation following the Fukushima nuclear accident. “2016’s Godzilla evokes the Fukushima plant that suffered a meltdown,” says former Asahi Shimbun (9/13) columnist Toru Hayano. Just like the crippled Fukushima power plant that will require constant surveillance for many decades, the task of erasing the
Godzilla menace is permanently passed down to future generations. In an article in Yomiuri (9/17), University of Tokyo Professor Takashi Mikuriya says: “Japan is forced to coexist with Godzilla while preventing it from reawakening. This ‘uneasy coexistence’ refers to the tense relations between Japan’s atomic power plants and its population.”

The movie appears to be a stinging indictment of the central government for failing to protect citizens in a disaster. This element has probably resonated strongly with moviegoers. The prime minister, cabinet ministers, and civil servants in the film waste time by debating whether the government should officially recognize the existence of the creature, and private sector experts tapped by the government simply spout irrelevant comments. Professor Osamu Sakura, who teaches the history of science and technology at the University of Tokyo, says: “Fans are intrigued by the realistic yet ironic portrayal of political leaders who panic and talk too much.” 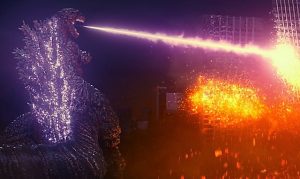 The film also depicts the cold reality of U.S.-Japan relations, as Washington prioritizes its own safety in managing the Godzilla crisis in Tokyo. Alarmed that the radioactive contamination wrought by Godzilla could spread globally, the U.S. shows no reluctance to support a UN resolution on launching a multinational nuclear attack on the monster, and Japan has no choice but to accept the U.S.-led decision. “The film portrays an extreme example of what could happen to the country under the security treaty with the U.S.,” says Mikuriya. However, in order to head off a “third atomic bombing” of Japan, a team of disgruntled young bureaucrats assembled by a deputy chief cabinet secretary collaborate with a female Japanese-American U.S. diplomat to produce a chemical agent to defeat Godzilla.

While feeling that the nation is essentially controlled by the U.S, people seem to appreciate how the movie shows geeky young experts from various government agencies coming together to manage the crisis, says Tokyo Metropolitan University social scientist Shinji Miyadai in his blog. “This is a film about how a wimpy son who hasn’t been able to gain independence from his domineering father overcomes an unprecedented disaster by exercising the courage and wisdom that only emerges when he is confronted by a once-in-a-lifetime catastrophe.” The scholar argues that the way the Godzilla crisis is defused invokes Japan’s history of weathering catastrophic events through the work of collective efforts by unnamed individuals instead of strong leadership by a single hero as often seen in Western narratives. He says fans of the movie were probably pleased with its message that “Japan will continue to be OK because of this unique trait of Japanese people.”