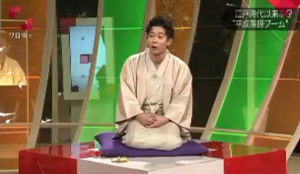 NHK’s “Close-up Gendai Plus” on Wednesday reported on the growing popularity of “rakugo,” traditional Japanese comic storytelling, among young Japanese.  The program reported on popular rakugo performer Shunputei Ichinosuke, who introduces classic rakugo stories in a modern style, adding that young Japanese are drawn to rakugo because it excites their imagination. There are currently about 800 professional rakugo performers, and more than 1,000 rakugo performances are held per month in the Tokyo metropolitan area. The performances are held not only at traditional rakugo theaters but also at bookstores, cafes, and bars, making this traditional form of entertainment more accessible.