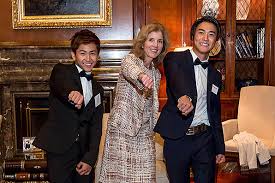 Fuji TV’s “TARO,” a midnight reality show featuring 15 young Japanese studying dance and music in New York, reported on a reception held at Ambassador Kennedy’s residence for the launch of “A Broader View.” The show featured two Project Taro members, Masahiro and Ayumu, who were invited to the reception by Ambassador Kennedy. The Ambassador told them: “Project Taro is a great example of the many things you can study in the U.S., including American culture. I’m excited that Japanese students are studying hip hop and American music. Not too many people think of those as subjects of study; that’s why I wanted to meet you.” The program also showed the Ambassador explaining that study abroad gives you the chance to learn about different customs and also the strengths of your own country. She asked the two Project Taro members to spread the word about their experiences studying in the U.S. They performed for the Ambassador and taught her some dance steps. The program said the Ambassador invited them to a dance party she hopes to host in the future.