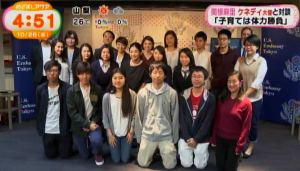 Fuji TV reported this morning that TV personality Mari Sekine attended an “A Broader View” event held at the American Center Japan on Tuesday. The network said the project, which aims to double the number of exchange students between the U.S. and Japan by 2020, was proposed by Ambassador Kennedy, adding that a video of Sekine interviewing Ambassador Kennedy was aired during the event. Sekine said about her interview with the Ambassador: “She had a great smile, and was friendly and gentle. We had a really candid discussion and she talked about her private life as well. The time went by fast because I was having so much fun.”