On Oct. 28, Kyodo News announced the results of the mail-in public opinion poll it conducted on the occasion of the 70th anniversary of the promulgation of the Constitution of Japan. Some 55% of pollees said that they are opposed to amending the Constitution under Prime Minister Shinzo Abe, while 42% said they are in favor. When asked if they think constitutional amendment was a focal issue in the July Upper House elections, 71% said “no” while 27% said “yes.” A total of 58% of respondents were pro-revisionists, saying either that constitutional amendment is “necessary” or “generally necessary.” Some 49% said that Article 9 does not need to be revised, surpassing the 45% who said the article needed to be amended.

Although pro-revisionists make up the majority, it is clear that there continues to be strong opposition to amending the core law under the Abe administration. A survey on the Constitution taken in June 2013, six months after the second Abe cabinet came into office, found that 63% of respondents were pro-revisionists, although a simple comparison cannot be made because the 2013 survey was conducted by interview.

Japan will mark the 70th anniversary of the promulgation of its Constitution on Nov. 3 this year, and the recent mail-in survey was taken during August and September targeting 3,000 men and women age 18 or over.

When asked if they favorably view the fact that those amenable to constitutional amendment under the Abe administration now hold more than two-thirds of the seats in both the Upper and Lower Houses after the July 2016 Upper House election, some 51% of respondents said “no” while 46% said “yes.” A two-thirds majority is needed in both chambers to propose constitutional amendments.

When pro-revisionist respondents were asked why they were in favor of constitutional amendment, some 66% said “because the articles and content of the Constitution are no longer in step with the times.” The next most frequent response was “because new rights and obligations need to be incorporated” at 22%.

A total of 40% said that constitutional amendment was either “not necessary” or “generally not necessary.” When this group of respondents was asked for the reason, 48% said “because peace is protected through the renunciation of war as stated in the Constitution,” and 29% said “because there is the risk that amendment will lead to ‘military buildup.’”

Note: Figures have been rounded off. 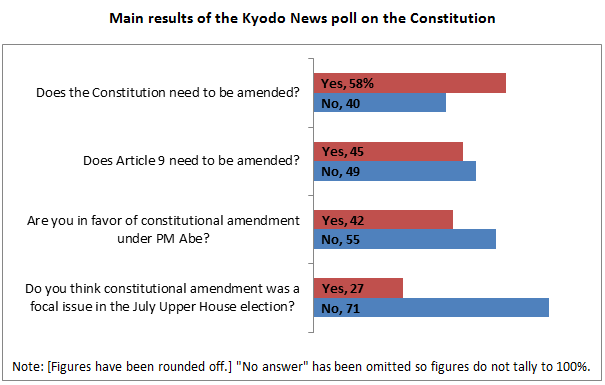