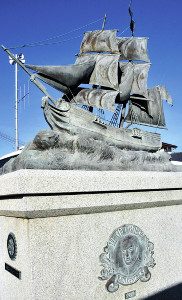 Several regional media outlets in the Kansai region, including Mainichi, Kansai TV, and Kii Minpo, reported on Wednesday on a ceremony held in Kushimoto, Wakayama Prefecture, on Nov. 1 to commemorate the 225th anniversary of a port call by Lady Washington, one of the two merchant vessels that arrived in Kushimoto in April 1791, 62 years prior to the arrival of the black ships of Commodore Perry. Mainichi wrote that this is believed to be the first contact between Japan and the U.S. that has been confirmed in official documents. About 600 people participated in the event and pledged to further promote friendship between the two nations. Kansai TV reported that a video message from Ambassador Kennedy was shown at the ceremony.