The fight against ISIL 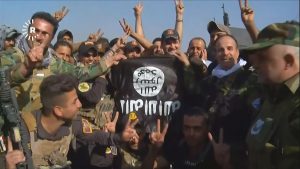 NHK’s “Close-up Gendai Plus” on Monday reported on the ongoing fight against ISIL, saying that Iraqi and other U.S.-backed forces have entered the cities of Mosul in Iraq and Raqqa in Syria, which remain strongholds of ISIL. The allied forces are reportedly facing difficulties because ISIL members are taking desperate measures, including launching sneak attacks and using children as soldiers or having them carry out suicide bombings. The program said it appears extremely difficult to eradicate ISIL without causing civilian casualties. Another source of concern is the fact that the allied forces are divided into different ethnic and religious groups and may face internal divisions. The program said taking back Raqqa will be far more difficult than taking back Mosul, since different forces within Syria are unlikely to unite in the fight against ISIL.