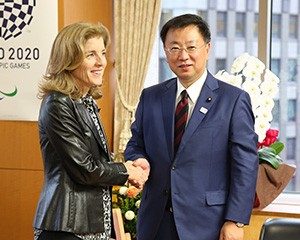 The Education Newspaper (Kyoiku Shimbun) reported that Ambassador Kennedy and Education Minister Matsuno confirmed continued cooperation between the U.S. and Japan in education and other sectors during their talks on Tuesday. The paper wrote that the Ambassador talked about the G7 Education Ministers’ meeting in Kurashiki in May and American and Japanese students studying abroad, stressing that exchanges between American and Japanese students are important for maintaining the U.S.-Japan alliance.