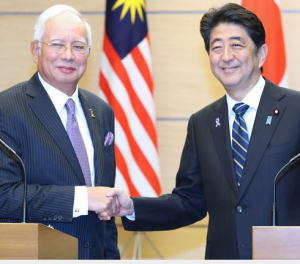 “We had a very good discussion,” Abe said at a joint press conference following the meeting. “I expressed strong expectations regarding the adoption of Japan’s bullet-train technology.”

The 350km rail is expected to cut travel time between the two cities to around 90 minutes from the current five-hour road journey. Trains are to hit speeds of over 300kph on a route comprising eight stops, seven in Malaysia.

Japan has exported bullet trains to Taiwan and soon to India. Last year, it lost to China in a bid to build a high-speed railway in Indonesia.

Singapore and Malaysia in July signed a memorandum of understanding for their rail link. Najib explained that both governments are on track to sign a final agreement in early December, paving the way for an international tender.

Najib said the tender will be issued in the fourth quarter of next year and that the process will be done in an “open, transparent and objective manner.”

Meanwhile, Tokyo agreed to give two patrol vessels to Malaysia to boost the country’s maritime capabilities as China expands its presence in the South China Sea. Both leaders affirmed the importance of resolving maritime disputes peacefully with all countries concerned.

“Malaysia continues to play its part to ensure the South China Sea will be an area of peace and stability, without which we cannot achieve prosperity,” Najib said.

In another matter, Abe and Najib agreed to push for ratification of the Trans-Pacific Partnership in their own countries. Their agreement comes in the wake of the election of Donald Trump as the next U.S. president. Trump campaigned against the TPP.

Abe is to meet Trump tomorrow in New York.

“The meeting is very much awaited by all [12] TPP countries,” Najib said. “Hopefully the strategic importance of the TPP will be recognized by the incoming administration.”

Najib’s three-day visit to Japan began on Tuesday; he came on Abe’s invitation.