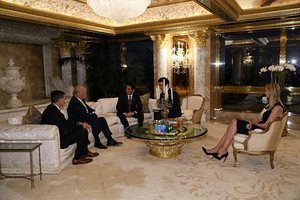 Commercial networks’ noontime infotainment shows gave extensive coverage to the Abe-Trump meeting in New York, paying special attention to several official photos of Abe’s visit to Trump Tower that were released by the Kantei afterward. The images showed that Ivanka Trump, who some media outlets reported might be tapped as ambassador to Japan, and Michael Flynn, who was allegedly offered the post of national security adviser at the White House, were present during part of the session perhaps at the onset. Former Kyodo News writer Mikio Haruna said on TV-Asahi that Flynn’s attendance was an encouraging sign for Japan since the retired general visited Tokyo only last month and held talks with several Japanese politicians, including Chief Cabinet Secretary Suga. TBS claimed that Abe managed to be the first foreign leader to meet with the President-elect thanks to intense lobbying by Japanese diplomats in Washington who have successfully established a good rapport with Ivanka’s husband Jared Kushner.

As for the contents of the meeting, the commentators speculated that the two did not discuss specific issues such as the TPP and Japan’s host nation support for the U.S. military and instead reaffirmed the importance of free trade and a stronger trans-Pacific alliance. A TBS reporter explained that the fact that Trump apparently did not have his own interpreter showed that he had little intention to hold substantive discussions on concrete topics.