“Sympathy budget” being used to enhance U.S. base functions 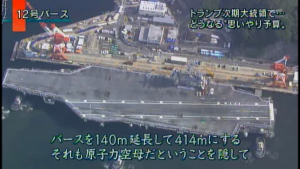 TV-Asahi’s “Hodo Station” broadcast a 10-minute report on the “sympathy budget” that the GOJ has offered to the U.S. military for almost four decades, noting that although the budget was disbursed initially for improving the welfare of American soldiers and their dependents, such as constructing movie theaters and housing facilities, recently some of the money has been used for enhancing base functions. The program took up repair work performed on a berth at Yokosuka Naval Base that can accommodate a nuclear-powered aircraft carrier and the construction of shelters to shield fighter jets at Kadena AB. Former PM Hatoyama noted that although his administration tried very hard to cut the budget, it was reduced only by 2% from the previous level. Council on Foreign Relations Senior Fellow Morton Halperin said it’s not unreasonable for the U.S. to ask Japan to help pay for the U.S. forces in Japan in light of the fact that the SDF is not contributing to the defense of the U.S. even though Washington is fully committed to the defense of Japan. However, a Japanese lawyer who is familiar with the matter underscored the importance of increasing transparency in negotiations between the USG and the GOJ on how the sympathy budget is used.