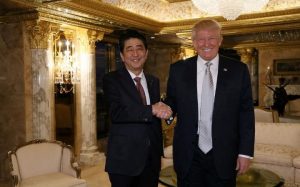 NHK as well as all commercial networks reported on a 90-minute meeting between Prime Minister Abe and President-elect Trump at the Trump Tower in New York on Thursday evening. NTV said the premier was invited to Trump’s home and only the interpreter accompanied PM Abe to the meeting. TV Asahi said Trump introduced Abe to his daughter Ivanka and her husband. The premier was quoted as telling reporters after the meeting: “We were able to hold heart-to-heart, candid discussions in a very warm atmosphere. The meeting gave me the conviction that we will be able to build a relationship of trust. We discussed various things, but I would like to refrain from disclosing the details since the President-elect has not officially been inaugurated as president yet and the meeting was informal. We agreed to meet again at a mutually convenient time for deeper discussions to cover a wider range of issues.” The premier also reportedly said: “Without trust, the alliance will not function. I am convinced that President-elect Trump is a leader I can trust.” 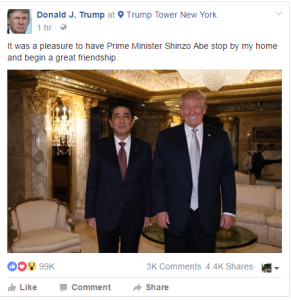 NHK said it is extremely rare for a Japanese prime minister to meet with a President-elect, adding that according to MOFA, this was the first such meeting since 2000. The network also said PM Abe was the first leader in the world to meet in person with the President-elect. A senior MOFA official reportedly said: “Since the major purpose of the meeting was for Prime Minister Abe to meet with President-elect Trump and build a relationship of trust, it was a success. Since Prime Minister Abe conveyed his views at the meeting, the two nations will continue to discuss specific policies.” NTV said Trump posted a message on his Facebook account saying it was a pleasure to “begin a great friendship.”

Meanwhile, TV Asahi reported that American political scientist Ian Bremmer said the meeting was a “win”  for Trump, as he successfully elicited a remark from Abe calling him a leader who can be trusted. Noting that the U.S. media have been reporting on Abe’s remark, the network said while there have been concerns about Trump’s words and actions up until now, Trump has successfully earned a “seal of approval” from a foreign leader, which will improve his image.