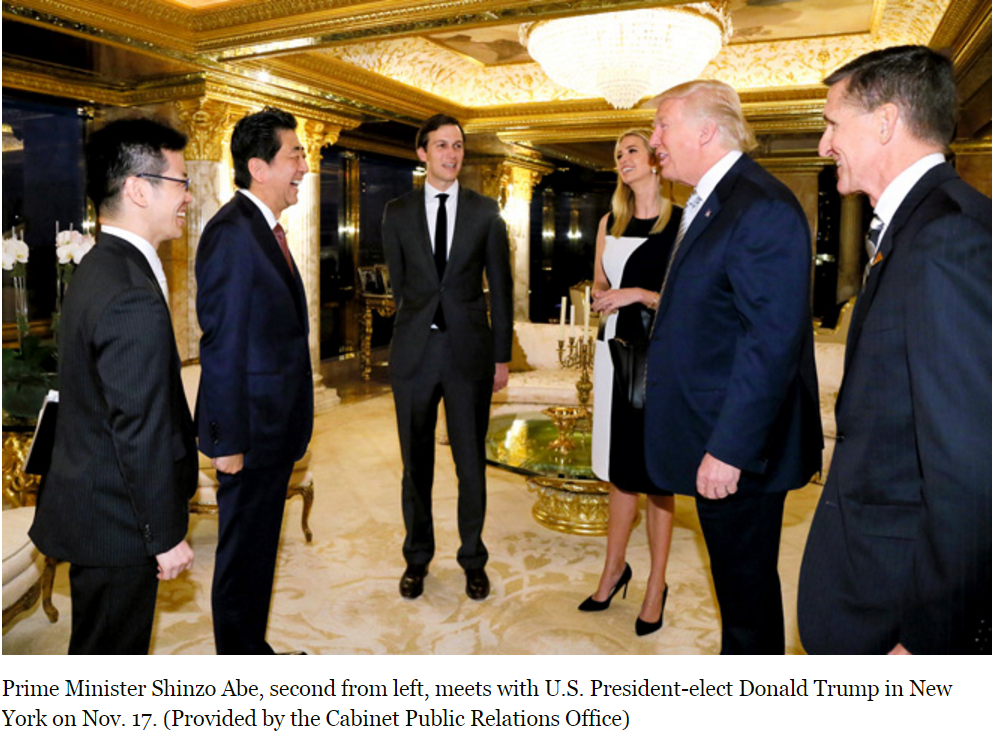 Prime Minister Shinzo Abe met with Donald Trump in New York on Nov. 17, making him the first foreign leader to meet with the billionaire real estate mogul since the stunning outcome in the U.S. presidential election.

It is no exaggeration to say that the eyes of the world were on what Trump would say in his meeting with Abe.

During his presidential campaign, Trump used the policy slogan “America First” and called for a review of U.S. security alliances. He asserted that the United States was bearing an excessive burden for the benefit of Japan and other allies.

Trump has vowed to withdraw the United States from the Trans-Pacific Partnership free trade arrangement and also suggested his country would opt out of the Paris Agreement, a set of new international rules aimed at halting global warming.

Countries were waiting for clues to whether the upcoming U.S. president will maintain or adjust his position on these issues.

But the meeting was declared to be unofficial, and, speaking to reporters later, Abe avoided explaining the thrust of his talks, saying, “I would like to refrain from” describing the specific content of what was discussed with Trump.

On the other hand, Abe stressed his confidence about building “trust” with the new American leader, saying, “It was a meeting that convinced me we will be able to build a relationship of trust.”

Until Trump is officially inaugurated on Jan. 20, incumbent President Barack Obama will continue to represent the United States.

Trump is in the middle of the transition process, making his picks for key positions in his administration and developing his policy agenda.

Trump’s remarks during his meeting with Abe were not officially prepared by the U.S. government nor discussed in advance by Japanese and American diplomats for coordination.

From this point of view, Abe’s decision against disclosing what Trump said during the meeting is understandable.

It is nevertheless disappointing, however, that Abe’s comments after the meeting were all about developing his personal “relationship of trust” with Trump.

Abe should, at the very least, have ensured that he and Trump reaffirmed the two countries’ continued commitment to working together for peace and stability in the Asia-Pacific region and the rest of the world and then sent out this message to the world.

True trust between two countries should not be affected by the priority in which the new leader holds his or her first bilateral meeting or whether there is good chemistry between the individuals.

Such a relationship needs to be built up gradually, based on specific actions involving the two countries through a time-consuming process.

How will Japan and the United States be able to cooperate in contributing to efforts to deal with a slew of tough challenges confronting the world, from free trade to nuclear nonproliferation to global warming?

Basic values the two countries have shared, such as freedom, democracy and the rule of law, need to underpin bilateral cooperation in tackling these issues.

Japan should take every opportunity and use every means available to persuade Trump to change his isolationist policies and make realistic policy decisions.

The Abe-Trump meeting should be a first step in the efforts by the two countries to build true trust through specific cooperation.