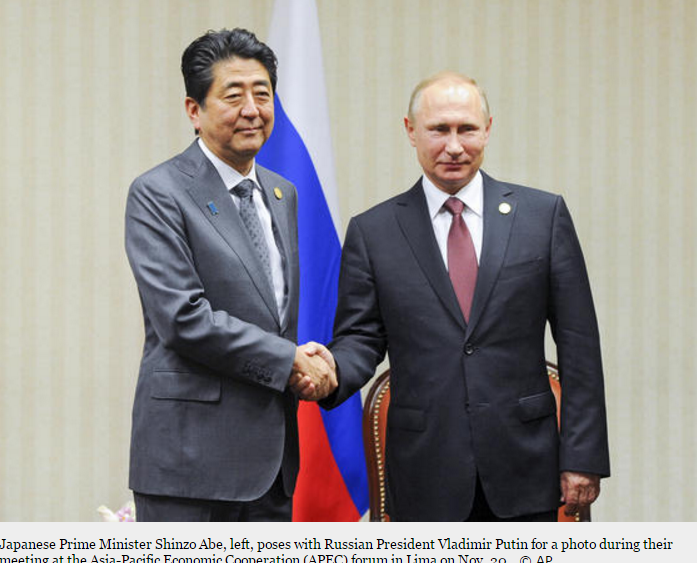 LIMA (Kyodo) — Russian President Vladimir Putin said in Lima on Sunday that concluding a peace treaty with Japan that has been delayed for decades over a territorial row is “not an easy path,” showing no sign of softening his position on negotiations.

For Japan, which has long held that it will pursue the peace treaty after first securing Russia’s recognition of Japanese sovereignty over the contentious chain of islands, Putin’s remark indicates that a resolution to the territorial issue is still a far-off prospect.

The Russian leader’s stance is sure to throw cold water on Japanese expectations that an Abe-Putin summit scheduled in Japan next month will yield a breakthrough on the islands, called the Northern Territories by Tokyo and the Southern Kurils by Moscow.

Putin made the comment at a press conference in the Peruvian capital on the sidelines of the Asia-Pacific Economic Cooperation forum summit held over the weekend.

Having held talks with Japanese Prime Minister Shinzo Abe the day prior, Putin said he and Abe discussed engaging in joint economic activities on the contentious islands, and expressed his desire to make that happen.

Putin said he is “ready for dialogue” toward resolving the islands issue and “there are various options” for settling the row.

Moscow has said it stands by a 1956 Japan-Soviet Union joint declaration, which states that the small island of Shikotan and the Habomai islet group will be returned to Japan upon the conclusion of the peace treaty. The two other islands Japan claims are Kunashiri and Etorofu islands.

But “it’s not written on what basis, under whose sovereignty (Shikotan and Habomai fall) and under what conditions they should be returned,” Putin said Sunday.

“The Southern Kurils are now territory under Russian sovereignty,” he said, indicating he will not easily compromise on the issue.

Putin’s visit to Japan next month is set to include talks on Dec. 15 in Abe’s home prefecture of Yamaguchi in the country’s southwest. Abe told Putin Saturday that he also wants to hold a further meeting in Tokyo on Dec. 16.

The leaders agreed to accelerate negotiations toward concluding the peace treaty when they met in May in the Black Sea resort of Sochi, where Abe presented to Putin an eight-point economic cooperation plan.