56% opposed to decision to assign “rush to the rescue” missions to SDF personnel, Asahi poll

In an Asahi Shimbun nationwide telephone public opinion poll conducted on Nov. 19–20, some 56% of respondents expressed opposition to the decision to assign “rush to the rescue” [kaketsuke keigo] missions to Ground Self-Defense Force units being dispatched to participate in UN peacekeeping operations (PKO) in South Sudan, while 28% expressed support. Under Japan’s [new] security legislation, SDF personnel are allowed to engage in “rush to the rescue” missions.

The third question asked for views on the Abe administration’s decision this month to assign “rush to the rescue” missions to SDF units to be dispatched to South Sudan. The gap between those for and against widened with 56% opposed and 28% in favor. Among cabinet supporters, views were evenly split with 43% in favor and 44% opposed.

Some 72% of pollees said that they approve of Prime Minister Shinzo Abe’s meeting with U.S. President-Elect Donald Trump in New York City, outdistancing the 16% who did not view the meeting favorably. The support rate for the Abe cabinet rose slightly to 51% (previous poll [Oct. 15–16]: 48%). The nonsupport rate was 25% (32%).

[Polling methodology: The survey was conducted on Nov. 19–20 on a computer-aided random digit dialing (RDD) basis of voters nationwide with telephone calls placed by pollsters to landline and mobile phone numbers (for landlines, some districts in Fukushima Prefecture were excluded). Valid responses were received from 971 persons (out of 1,945 households found to have one or more eligible voters) for landline numbers and from 1,002 persons (out of the 2,107 persons found to be eligible voters) for mobile numbers. The valid response rates were 50% for landline numbers and 48% for mobile numbers.] 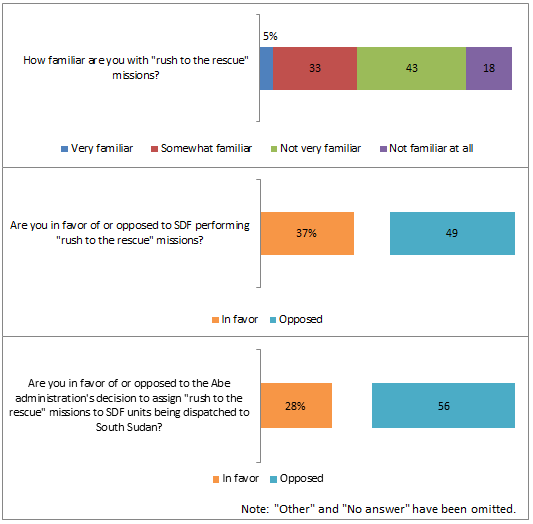