56% say it is “not good” that Trump was elected U.S. president, Nikkei poll

According to the Nikkei Inc./TV Tokyo public opinion poll conducted on Nov. 25–27, some 56% think that it is “not good” that Donald Trump has been elected the next president of the United States, vastly exceeding the 20% who think it is “good.” Some 46% of respondents said that the Japan-U.S. relationship will “not change” under the new Trump administration, making it the most frequent response.

Trump’s inflammatory rhetoric during the campaign is thought to have caused the Japanese public to respond negatively to his election. Breaking the responses down by gender, some 62% of women were critical of Trump, compared with 51% of men. As the President-elect seems to have adopted a more pragmatic approach in some areas since the Nov. 8 election, 46% said that U.S.-Japan relations are unlikely to change under the Trump administration, while 34% expect ties to deteriorate and 6% expect them to improve.

The political party support rates were as follows: Liberal Democratic Party – 45% (down 3 percentage points), Democratic Party – 9% (no significant change), independents – 32% (up 5 points). The telephone poll was conducted on Nov. 25–27 by Nikkei Research Inc. targeting men and women, aged 18 and over, nationwide on a random digit dialing (RDD) basis, including mobile phones [as well as landlines]. A total of 1,018 valid responses were received for a response rate of 46.1%. 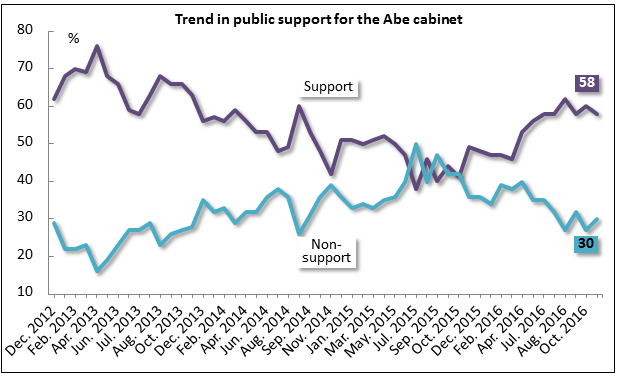