The Nikkei Inc./TV Tokyo public opinion poll conducted on Nov. 25–27 revealed that the Abe administration’s key economic and diplomatic policies are not gaining broad public support. The poll also found opposition to the bill to revise the National Pension Law and the bills related to the Trans-Pacific Partnership (TPP) trade pact, which the government and ruling parties hope to pass by extending the extraordinary Diet session. Although the ruling parties hold a majority in the Diet, they are faced with the challenge of garnering public understanding through Diet debate.

According to the poll, the public is split over approving the TPP during the current Diet session, with 37% in favor and 37% opposed. President-elect Trump has said that he will withdraw the United States from the trade pact on his first day in office in January 2017, and it looks unlikely that the trade agreement will go into effect. Some 25% said either “Can’t say + Don’t know” or “Can’t say either way.” Many members of the public cannot figure out what kind of impact the TPP will have.

Turning to foreign policy, 45% said they are opposed to assigning “rush to the rescue” missions [kaketsuke keigo] to Ground Self-Defense Force personnel participating in UN peacekeeping operations in South Sudan. Some 41% said they are in favor.

The new mission was made possible under the new security legislation passed in September last year. In May 2014 before the legislation was passed, the Nikkei Inc./TV Tokyo public opinion poll asked respondents if they were in favor of or opposed to having SDF participate in “rush to the rescue” missions although the question did not inquire specifically about the case of South Sudan. Some 47% said that it should be permitted for “rush to the rescue” missions to be assigned to SDF personnel, exceeding the 34% who disagreed. It seems that there may be some understanding among the public about assigning “rush to the rescue” missions to SDF personnel, but the public is concerned in the case of South Sudan because public safety is poor there.

[Polling methodolgy: The telephone poll was conducted on Nov. 25–27 by Nikkei Research Inc. targeting men and women, aged 18 and over, nationwide on a random digit dialing (RDD) basis, including mobile phones [as well as landlines]. A total of 1,018 valid responses were received for a response rate of 46.1%.] 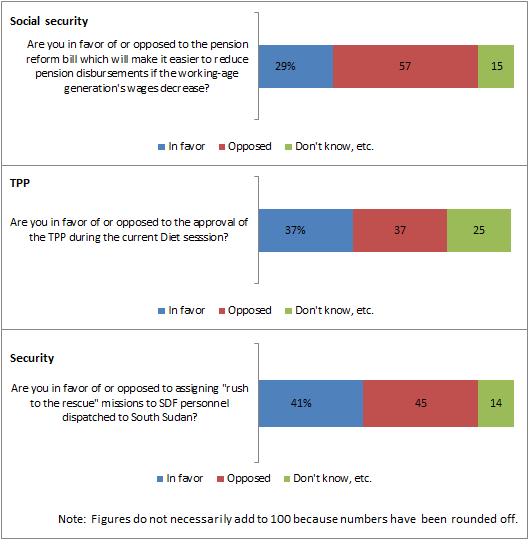