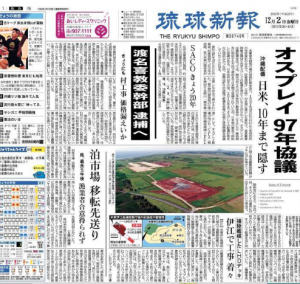 Ryukyu Shimpo gave top play to a report saying that the Defense Facilities Administration Agency submitted to a meeting with the U.S. in October 1997 a document referring to the possibility of deploying Ospreys in Okinawa. The paper wrote that although the U.S. and Japan had discussed the idea of mentioning Osprey deployment in the final SACO report on Dec. 2, 1996, until right before the report was issued, the two nations left it out of the report at the request of the Japanese side. The paper claimed that although the GOJ did not officially announce until 2010 its plan to deploy Ospreys in Okinawa, the agency’s document shows that Japan discussed Futenma relocation with the U.S. in 1997 based on the premise that Ospreys would be deployed in Okinawa. The paper wrote that the document was submitted to a technical meeting with the U.S. Embassy in Tokyo and the USFJ on October 6, 1997, at which the two nations discussed the details of the Futenma Replacement Facility (FRF), citing the introduction of the MV-22s and decks for the combat aircraft loading area  and field carrier landing practice as areas of concern. According to a source connected to the issue, the U.S. and Japanese sides confirmed at the meeting that the runway at the FRF should be at least 1,500 meters long for use by Ospreys. However, although the SACO report stated that the facility would be approximately 1,500 meters long, it did not state that the Osprey deployment was the reason for the length.