Discussions on a taxation reform proposal for fiscal 2017 are heating up at the Liberal Democratic Party’s Research Commission on the Tax System, led by an informal gathering or so-called “inner circle” of nine tax specialists. The commission takes requests from relevant ministries and agencies and industry bodies, puts them into shape and spends about a month to draft a written proposal. But its glory is fading, as the Prime Minister’s Office, Kantei, is broadening its influence in tax reform discussions.

The inner refers to a limited number of key executives within the tax commission, such as chairman, subcommittee chairman and adviser. They are so influential that senior officials of ministries and agencies as well as executives from industry bodies often make the rounds of their offices to pitch policies that they want to be included in a taxation reform proposal. Of the commission’s key executive members, Chairman Yoichi Miyazawa, former Chairman and incumbent Supreme Advisor Takeshi Noda, subcommittee chairman Fukushiro Nukaga, advisor Masahiko Komura and acting subcommittee chairman Yoshimasa Hayashi are called “core inner” people. 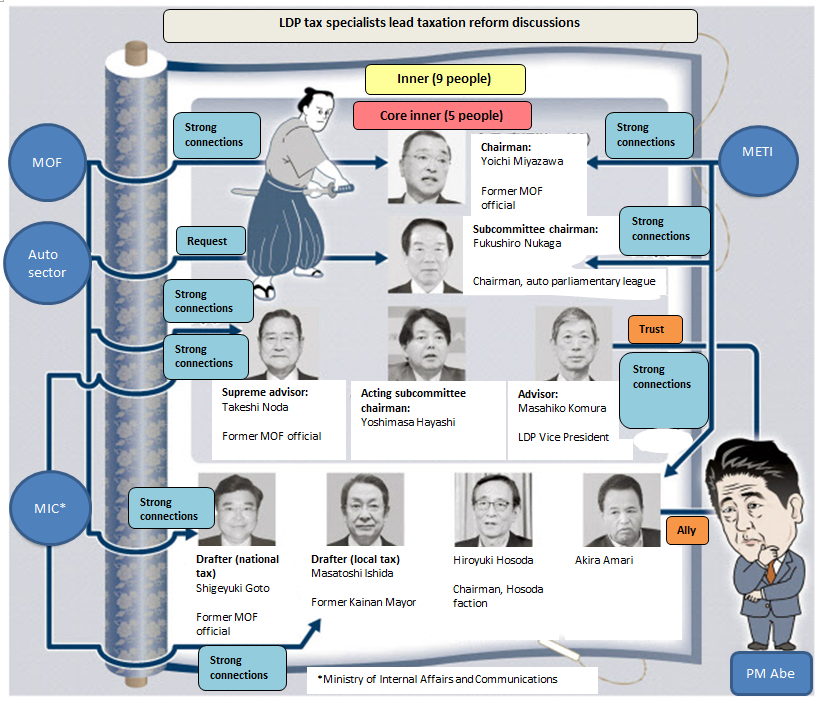 Miyazawa, who hailed from the Ministry of Finance and is a nephew of former Prime Minister Kiichi Miyazawa, served as Minister of Economy, Trade and Industry for a year from October 2014 under Prime Minister Shinzo Abe. He coordinates opinions on such policies as a corporate tax reduction between MOF, which focuses on fiscal integrity, and METI, which advocates tax reductions.

Noda, who also entered politics from MOF, is known as a strong proponent of fiscal integrity within the LDP tax commission. He questioned Abe’s dissolution of the Diet to seek a public mandate on postponing raising the consumption tax to 10%, which was initially scheduled to take place in October 2015. This later dealt him a fatal blow.

With the Kantei growing influence in tax reform discussions, the tax commission’s inner circle struggles to build a good relationship with it. The commission faced a moment of truth when Miyazawa succeeded Noda in October 2015. Discussions with the Komeito Party were derailed over the introduction of a reduced tax rate along with the consumption tax hike, which was initially scheduled to take place in April 2017. Noda supported a MOF proposal. This did not help close the gap with the Kometio. To address this, Abe, who heads the LDP, effectively dismissed Noda.

Nukaga, subcommittee chairman in the tax commission, leads discussions on automobile related taxes, such as a tax break for environmentally-friendly vehicles, as head of an LDP parliamentary league on automobiles.

Beside the five core members, the inner has four other key people: former Minister for Economic and Fiscal Policy Akira Amari, LDP General Council Chairman Hiroyuki Hosoda, Shigeyuki Goto, a former MOF official, and Masatoshi Ishida, a former mayor of Kainan in Wakayama Prefecture. Goto is in charge of drafting a tax reform proposal for the national tax, while Ishida handles a proposal for the local tax. (Abridged)