President-elect Trump to nominate Gen. Mattis as secretary of defense 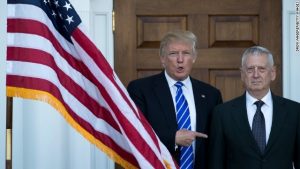 NHK reported this morning that President-elect Trump delivered a speech in Ohio on Thursday, during which he disclosed his plan to appoint retired Marine Gen. James Mattis as his secretary of defense. The network said Gen. Mattis led a task force in anti-terrorism operations in Afghanistan and a division in the Iraq war, adding that his nickname is “Mad Dog” and he has plenty of combat experience and a deep knowledge of security. The network also said he was criticized in 2005 when he said: “It’s a hell of a lot of fun to shoot” bad people in Afghanistan. Noting that President-elect Trump has already decided to appoint retired Army Lt. Gen. Michael Flynn as his national security adviser, the network said his national security team strongly reflects his policy to eradicate terrorist organizations, including ISIL.