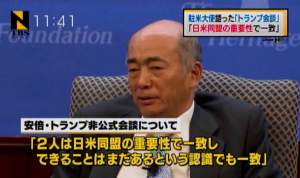 TBS reported at noon that Japanese Ambassador to the U.S. Sasae said during a panel discussion hosted by the Heritage Foundation on Thursday in Washington that Prime Minister Abe and President-elect Trump “held candid discussions on a broad range of issues, including the regional situation and the economy.” He said that they agreed on the importance of the U.S.-Japan alliance and that there is more to be done. Sasae also reportedly said he got the impression that Trump “listens to what people say and tries to digest many views.” Concerning the TPP, Sasae reportedly expressed hope to persuade the new Trump government not to withdraw from the pact. Kyodo carried a similar article. NHK also reported the news at 3 p.m., quoting Sasae as also saying: “We still believe that the TPP is the best means in terms of the strategic interest of the United States as well as its economic interest.”