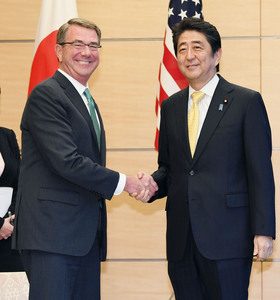 Most papers reported on visiting Secretary of Defense Carter’s meeting with Prime Minister Abe at the Prime Minister’s Official Residence on Tuesday, during which the premier stated that he will visit Pearl Harbor later this month to remember the victims of Japan’s attack in 1941 and express his resolve to never repeat the tragedy of war. The papers quoted the defense secretary as saying in reply that President Obama is looking forward to Abe’s visit to Pearl Harbor and that the prime minister’s visit to the USS Arizona Memorial together with the President will be a sign of joint commitment to peace and reconciliation between the United States and Japan.

Carter and Abe confirmed the plan to return to Japan some 4,000 hectares of land at the Northern Training Area on Dec. 22. Nikkei quoted the Pentagon chief as saying that this will be the first large land transfer in the history of the U.S-Japan alliance and promising that the plan will be achieved. The paper wrote that with the upcoming government transition in the U.S. in mind, the two leaders also agreed that the U.S. and Japan will strengthen their cooperation for the peace and stability of the Asia-Pacific region. According to the paper, Carter reiterated the United States’ position that Article 5 of the U.S.-Japan Security Treaty, which stipulates the United States’ obligation to defend Japan, applies to the Senkaku Islands. Abe expressed Japan’s gratitude to Secretary Carter for his contributions to strengthening the U.S.-Japan alliance together with President Obama, and Carter reportedly stated in reply that the bilateral alliance is the strongest it has ever been.