Major companies are divided over the introduction of upper limits on overtime hours, which is being discussed by the government as part of working-style reforms, a recent Yomiuri Shimbun survey showed.

According to the survey, 47 percent of major companies said they were concerned their operations would be hindered, while 45 percent said they did not have such concerns.

The survey was conducted in October and November, after the government set up in September the Council for the Realization of Work Style Reform, which is chaired by Prime Minister Shinzo Abe. The survey covered 180 companies, of which 143, or 79 percent, responded.

The government aims to cap overtime working hours because under the current law, employees are effectively allowed to do unlimited amount of overtime if labor unions conclude agreements with employers.

Asked about challenges when reviewing the practice of long working hours — for which multiple answers were allowed — 81 percent of respondents who said they were concerned about the possible caps cited reducing the amount of work. This answer was also selected by 63 percent of those who said they were not concerned about the caps, a difference of 18 percentage points.

A similar wide gap was also seen over another choice. Among the respondents who said they were concerned about the possible caps, 63 percent regarded measures to prevent business performance from declining as a challenge for reviewing the practice of long working hours. This answer was selected by 52 percent of those who said they were not concerned about possible regulations.

The survey results indicate that the more efforts companies have made to review their business operations, such as reducing the amount of work, the less concerned they are about the possible caps on overtime work.

When it comes to the principle of equal work for equal pay, 66 percent said it would be difficult to introduce such an approach, which included 55 percent saying it would be somewhat hard to do so.

Asked why, some respondents said there were cases in which even though employees seem to be working on the same assignments, they are given different roles and expectations over the medium and long term. They also pointed to different degrees of responsibility, and different personnel systems in terms of job relocation and other factors. These three answers were cited by more than 80 percent of respondents. 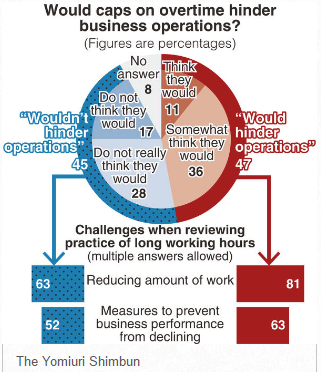