Japanese 15-year-olds continued to rank high among their international peers in science and mathematics, according to a global academic assessment released Tuesday by the Organisation for Economic Co-operation and Development.

In the latest Programme for International Student Assessment, or PISA, conducted in 2015, Japanese students ranked second in scientific literacy and fifth in mathematical literacy among 72 countries or regions. In the previous survey in 2012, Japan took fourth in science and seventh in math.

Japan led among the 35 OECD member countries in both fields.

Nearly a decade after Japan scrapped its so-called relaxed education programs and drastically increased pages in textbooks, students seem to be doing well, at least in math and science.

As for reading, however, Japan dropped from fourth in 2012 to eighth, indicating a decline in vocabulary and comprehensive abilities due in part to the rapid digitalization of their intellectual environment.

Although the education ministry said the decline was partly due to the survey’s transfer to a computer-based test in 2015, it said there was possibly a deterioration in linguistic abilities.

The ministry said that while more students today use smartphones to gather information, the number of students who read a newspaper has declined in recent years. For some students, school textbooks are the only books they read, a ministry official said.

“There could be children who can’t understand what is written in their textbooks,” the official said. “We need to beef up their vocabulary skills.”

Some 540,000 students in 72 countries and regions took part in the latest triennial survey. In Japan, roughly 6,600 randomly selected students from 198 high schools participated.

In the latest assessment, Singapore topped the charts in all three fields for the first time.

Andreas Schleicher, OECD director for education and skills and special adviser on education policy to the secretary-general, congratulated Japan on its results but advised increasing efforts to nurture aspiration in science.

“Japan is one of the strongest performing education systems, coming out of the PISA assessment with great strength, particularly in science,” Schleicher said, speaking via Skype.

“But clearly there are areas for improvement. … Many Japanese 15-year-olds do well in science tests but they are not aspirational of scientific careers as much as students in other countries,” Schleicher said. “So, giving students motivation and capacity not only to do well in the test but also to see science as something that opens life opportunities (is something Japan needs to work on).”

Despite the good scientific literacy skills, the PISA survey found that Japanese youth continue to show a low interest in science-related jobs. Only 18 percent said they want a science-related job by the time they are 30 years old. The OECD average was 24.5 percent.

The PISA test was launched in 2000 to examine the abilities of 15-year-old students to use their knowledge and skills to solve complex problems that lack an obvious solution.

The PISA test has had a lasting impact on Japan’s education policy, following the so-called PISA shock of 2003. That year’s survey saw Japan drop to sixth from the top spot in math and to 14th from eighth in reading, leading the government to scrap the much-criticized relaxed education programs in 2008. 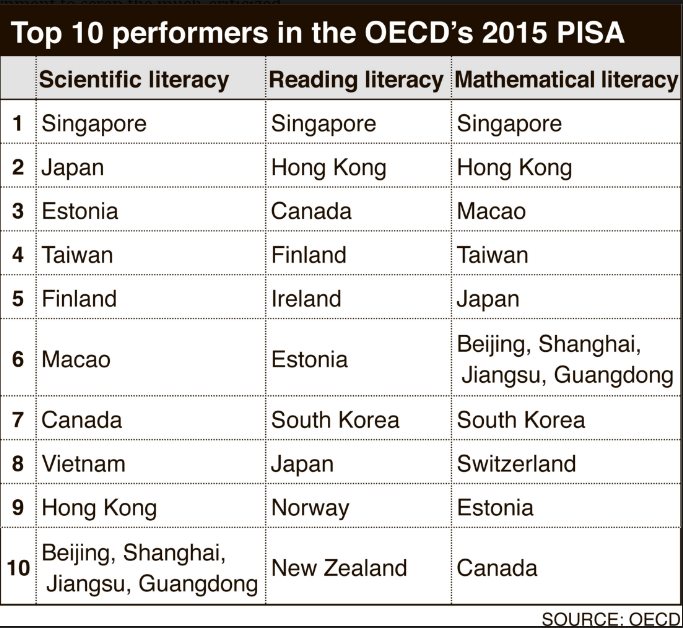