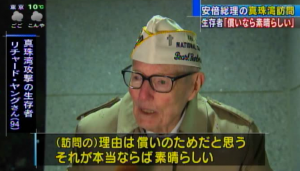 TV Asahi reported at noon on a memorial ceremony held on Tuesday in Washington to honor those who perished in the Pearl Harbor attack. The network quoted one of the survivors of the attack as saying in an interview: “I think the purpose of the visit is to make amends. If that’s true, that’s good…It wouldn’t hurt [if Abe apologized] but what has happened is we dropped the atomic bomb on Japan. So if you start apologizing, who knows where it would end.”