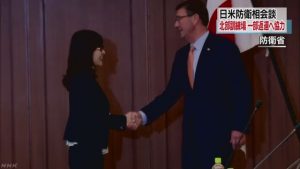 TBS reported at noon on a meeting between visiting Secretary of Defense Carter and Defense Minister Inada at the MOD this morning, saying that they both stressed the importance of the U.S.-Japan alliance at the start of the meeting. According to the network, they also agreed to continue discussions on diminishing the scope of the civilian component to be covered by the SOFA. NHK carried a similar story, saying that the ministers also agreed to cooperate toward realizing the partial return of the NTA on Dec. 22. In light of the severe security environment in the region, they also confirmed that the Senkaku Islands fall under the scope of the U.S.-Japan Security Treaty and that the U.S.’s extended deterrence remains solid against North Korea’s provocations.