Trump welcomes Son’s pledge to invest $50 bn in US 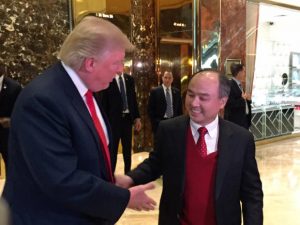 SoftBank will invest in startups, especially information technology companies, Son told reporters in the lobby of the Trump Tower in Manhattan, voicing expectations that the U.S. economy will grow and expand business opportunities under the incoming president.

It was the first revelation of Trump’s meeting with a Japanese executive since his election victory.

Standing next to Son, Trump called the Japanese tech billionaire one of the most wonderful men in business. The first-ever meeting between Son and Trump was arranged through a mutual friend.

SoftBank, which owns U.S. wireless carrier Sprint, is ready to invest aggressively in the U.S. again, Son said. A document prepared by Son said the company will invest $50 billion in the U.S. in the coming four years and create 50,000 jobs.

The planned investment will come through a fund SoftBank plans to establish at a targeted amount of up to $100 billion jointly with Saudi Arabia’s sovereign wealth fund.

Son, who has a home in Silicon Valley, is closely watching technological innovations in the U.S. and has established a system under which American executives monitor U.S. businesses fulltime to find investment destinations.

Son expressed expectations that the growth of the U.S. economy “accelerate again” under President Trump.

The U.S. is likely to become a country with various business opportunities as the Trump administration will carry out deregulation in a variety of fields, he said.

Heartily welcoming Son’s decision, Trump twittered, “Masa said he would never do this had we (Trump) not won the election,” boasting that his election victory will lead to large corporate investment and the creation of jobs.

In 2013, SoftBank purchased Sprint, ranked third in the industry at that time, as part of its strategy to merge it with the fourth-ranked T-Mobile US in a bid to create a wireless carrier capable of competing with industry leaders AT&T and Verizon Wireless. But SoftBank gave up the merger plan after the U.S. Federal Communications Commission’s refused to authorize it.

Deregulation in the telecommunications industry was not on the agenda at his meeting with Trump, Son said.

Following the Son-Trump meeting, Sprint stock on Tuesday temporarily jumped 7.0% in New York trading from Monday’s close to $8.61. During Wednesday morning trading in Tokyo, SoftBank saw its stock rise 355 yen or 5% from the previous day to a year-to-date high of 7,311 yen.