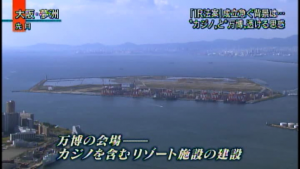 TV-Asahi’s “Hodo Station” reported on the Abe administration’s strong determination to enact the integrated resort bill aimed at legalizing casinos before the current Diet session ends on Dec. 14. The Kantei and the LDP leadership are reportedly hoping to please the Japan Innovation Party (JIP) led by Osaka Governor Matsui, who considers the construction of a casino on an unused artificial island in Osaka Bay indispensable for hosting the World Exposition in 2025. As Osaka has spent some $63 billion in taxpayer money on the development of the reclaimed island that has been largely vacant for years, the governor firmly believes that hosting a gambling facility and the Expo will “transform a major liability into a profitable asset” that can draw millions of foreign tourists. Because the deadline for submitting an official bid to host the Expo is May 22 of next year, Osaka is desperately hoping that the legislation will obtain parliamentary approval this year.

Strong proponents of the legislation include Chief Cabinet Secretary Suga, who wants to reinforce the political foundation of the administration by strengthening ties with the JIP, and LDP Secretary General Nikai, who was recently selected as the chair of a supra-partisan parliamentary group assisting Osaka’s World Expo bid. Regular commentator Goto, a former Kyodo News managing editor, said the emerging “political honeymoon” between the LDP and the JIP indicates that the third largest opposition party may join the ruling coalition eventually.