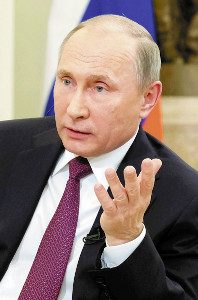 Yomiuri gave top play to a joint NTV-Yomiuri interview with Russian President Putin at the Kremlin on Dec. 7. The Russian leader called for Japan’s flexibility in talks on a peace treaty and the Northern Territories. He insisted that the talks on a peace treaty should be based on the 1956 Soviet-Japanese Joint Declaration in which Moscow agreed to hand over to Japan Habomai and Shikotan after the conclusion of a peace treaty, and that Japan’s proposal to discuss the other two islands of the Northern Territories is beyond the scope of the joint declaration. Putin also stated that the Northern Territories are internationally recognized as Russian territory and it is necessary for Japan to understand that the consequences of WWII have been confirmed by relevant international documents. The Russian leader also expressed his intention to seek an agreement during his talks with Prime Minister Abe in Yamaguchi on Dec. 15 on enhanced “joint economic activities” on the Northern Territories, but added that such activities should be carried out based on the understanding that the islands are Russian territory. Putin commented on Russia’s relations with Japan by saying that he is seeking complete normalization of the bilateral ties and that the continued absence of a peace treaty between the two nations is “anachronistic.”

Putin criticized Japan’s sanctions on Russia over Ukraine, saying that it will be difficult for Moscow to develop economic relations with Tokyo if sanctions are imposed. However, Chief Cabinet Secretary Suga responded negatively to Putin’s desire for Japan to lift its sanctions on Russia by saying that Japan will act appropriately by respecting the unity of the G7. The Russian leader also commented on Russia’s relations with the U.S. under President Trump, saying that he agrees with Trump’s position on improving ties with Moscow.

All other national dailies reported on the gist of the interview released by the Kremlin, highlighting Putin’s remarks that Russia has no territorial dispute with Japan.