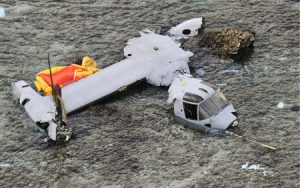 All papers other than Nikkei front-paged follow-up reports on the emergency landing by an MV-22 Osprey in Okinawa on Tuesday, with color photos showing the scattered wreckage of the aircraft in shallow waters off Nago.

Okinawa Area Coordinator Nicholson stated at a news conference on Wednesday that the Marines have decided to suspend Osprey flights in Okinawa until their safety is confirmed. While apologizing for the incident by saying it was regrettable, Nicholson emphasized that the incident occurred because the aircraft’s propeller was damaged after it struck a hose extended from a refueling plane and that the incident was not caused by the mechanical system of the aircraft. He also said the pilot tried to return to MCAS Futenma, but later decided to go to Camp Schwab to avoid flying over populated areas surrounding Futenma, eventually landing in shallow waters near the camp. He stated that he was proud of the pilot for taking action to save the lives of many Okinawans as well as the crew. However, Okinawa Governor Onaga reacted sharply to Nicholson’s statement. The governor plans to directly lodge a protest with the GOJ today and call for withdrawing the Ospreys from Okinawa.

Lt. Gen. Nicholson also acknowledged during the news conference that another Osprey made a belly landing on Tuesday at the Futenma Air Station due to a landing gear problem, adding that the aircraft landed safely.

Mainichi wrote that Ambassador Kennedy told Foreign Minister Kishida on Wednesday that as a result of consultations with the U.S. military, the U.S. government has decided to temporarily suspend Osprey flights. Yomiuri wrote that the Ambassador expressed to the foreign minister her regret over the incident and promised swift investigations into the cause of the incident. Nikkei quoted the Ambassador as telling Kishida that the USG will share the results of the investigation with the GOJ.

Asahi wrote that as the first major incident to occur since the Osprey deployment in Okinawa four years ago, the emergency landing has provoked the Okinawa people’s anger and dealt a blow to the Abe administration’s efforts to reduce the base-hosting burden on Okinawa. Although Chief Cabinet Secretary Suga stated that he believes that the incident will not affect the planned ceremony on Dec. 22 to mark the return of a large portion of the Northern Training Area, Governor Onaga has called for the cancellation of the ceremony. The paper wrote that despite the U.S. military’s pledge to fully investigate the cause of the emergency landing, the incident may cast a dark shadow over the Osprey’s operations in Japan. Mainichi wrote that regardless of concern over the incident’s impact on Futenma relocation, the GOJ is set to uphold its plans to resume landfill work at Henoko. However, it remains to be seen whether the central government will be able to resume the landfill work as planned because of the strong reaction to the incident in Okinawa. Yomiuri wrote that the incident will likely affect the ongoing FRF construction at Henoko. The paper also wrote that although the GOJ has planned to play up its efforts to reduce the base-hosting burden on Okinawa by holding an NTA return ceremony with the participation of Ambassador Kennedy and CCS Suga, the incident has thrown cold water on these efforts.