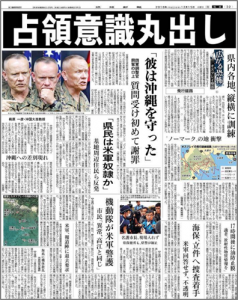 This morning’s two major Okinawa dailies gave exhaustive coverage to the Osprey accident, devoting numerous pages to the anger and dismay rapidly surging in the island prefecture. They used strong rhetoric to highlight local sentiment, with headlines reading: “People shocked and upset by lethal  weapon in the air” and “‘Flying disgrace’ reveals one defect after another.’” Both papers expressed strong displeasure in response to the press conference by Okinawa Area Coordinator Nicholson, in which the top U.S. military official in Okinawa did not appear very apologetic and instead was busy defending the crew for landing the plane in the water to avoid endangering the Okinawan people. A Ryukyu Shimpo headline said: “Occupier mentality still strong.” The paper reported that in a meeting with Okinawa Vice Governor Ageda, who lodged a strong protest, the Marine general “pounded on the desk” in protest of what he saw as Okinawa’s attempt to “politicize” the accident. The daily quoted an Okinawa official who sat in on the session as saying: “I didn’t know which side was protesting. Nicholson said we should be grateful to the pilot for averting a crash in a residential area. But the pilot’s technique and efforts [to avoid a crash on the ground] and our apprehension are completely separate things.”

The articles also strongly criticized the Japanese government for failing to respond to Okinawa’s concern about the safety of the Osprey. Ryukyu Shimpo noted that the festive mood that had spread in the central government because of the upcoming reversion of the Northern Training Area and the Supreme Court’s imminent decision to rule against the Okinawa governor’s rescindment of the landfill permit was completely shattered by the Osprey mishap. An MOD source said: “Things were going pretty well and we thought we would have a very good new year. But the the worst possible thing happened.”

Okinawa Times wrote that the initial response to the emergency landing by the Okinawa police and the Japan Coast Guard was slow due to the sketchy and sometimes conflicting information provided by the U.S. military, noting that the Japanese authorities had difficulty pinpointing the exact location of the impact. The daily took issue with the lack of coordination between the U.S. military authorities and their Japanese counterparts, quoting a local investigative official as saying: “The U.S. side was too slow to provide information.”