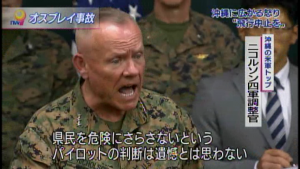 Nightly news programs on Wednesday reported extensively on the Osprey accident, noting that the Okinawan people had feared that an incident like this would occur ever since the deployment of tilt-rotor planes at MCAS Futenma several years ago. All of the programs aired video of Okinawa Area Coordinator Nicholson telling the Japanese press corps in a very forceful tone: “I’m very proud of our young pilot.  I’m very proud of the decision he made not to try to get Futenma or Kadena…. We regret this accident. But we do not regret the great work of our young pilot and the decision he made not to endanger the Okinawan people…. I don’t apologize for the hard work we are doing  every night offshore in training.” Program anchors and commentators expressed dismay over a remark that Nicholson reportedly made to Okinawa Vice Governor Ageda saying that the pilot should be “commended” for not endangering local people. On TBS’s “News 23,” former Asahi Shimbun columnist Hoshi said the U.S. general’s comment revealed that the U.S. military actually thinks that the local people shouldn’t complain because it is defending them.

Former Kyodo News writer Goto said on TV-Asahi’s “Hodo Station” that the incident is bound to have adverse effects on the planned deployment of U.S. and Japanese Ospreys in Yokota, Chiba, Saga, and elsewhere. He projected that Prime Minister Abe will have no choice but to bring up this subject when he holds his last summit meeting with President Obama in Hawaii in late December. The journalist noted that the U.S. military will decide independently when to resume Osprey flights, adding that the GOJ will probably have no choice but to take a wait-and-see attitude because the SOFA stands in the way of an independent investigation by Japanese authorities.