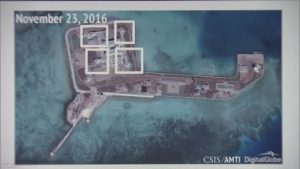 NHK reported at noon that U.S. think tank CSIS released the results of its analysis of satellite photos of artificial islands built by China in the South China Sea, which show that China has apparently deployed weapons on the artificial islands there. According to the network, anti-aircraft guns and “close-in weapon systems” have been confirmed on five of the islands, and hexagonal structures that appear to be foundations for such weapons have been confirmed on the remaining two islands. The network said DOS spokesperson Kirby urged China once again to stop militarizing the islands on Wednesday, by saying: “There should be no need for further reclamation or militarization of these man-made features.”