Some Twitter users sympathize with top Marine official in Okinawa 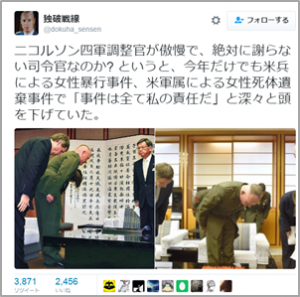 Not many new tweets have been posted since last night after Okinawa Area Coordinator Gen. Nicholson drew strong criticism for appearing not to be very apologetic about the Osprey accident in Wednesday’s press conference. However, two tweets supporting his performance have drawn a lot of attention. One of them, which was retweeted almost 4,000 times, said: “Is Mr. Nicholson too arrogant to make an apology? These photos show him bowing deeply on two occasions this year over a sexual assault by a service member and a murder by a civilian base employee. He took full responsibility.” The other one by former Sankei reporter Yamagiwa, which was retweeted over 1,600 times, said: “Mr. Nicholson disclosed that one of the crewmembers aboard the Osprey went to Kumamoto on an earthquake relief mission. The general also said it was appropriate for the pilot not to try to go to Futenma or Kadena and instead land in shallow water. It’s fine for Japan to express regret over the incident, but isn’t it more appropriate for us to offer prayers and be glad that the crew returned safely?”