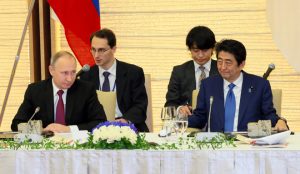 All Saturday morning papers ran extensive front- and inside-page reports on bilateral talks held between Prime Minister Abe and President Putin at the Kantei on Friday and their post-meeting joint press conference, during which the two leaders issued a press statement saying that Japan and Russia agreed to launch talks on joint economic activities in the Northern Territories. Abe said at the news conference that the joint economic activities are an important step toward concluding a peace treaty, and Putin stated that the joint activities will help build confidence between the two nations and pave the way for discussing a peace treaty. However, the papers wrote that the two leaders failed to narrow their differences over sovereignty of the four Russian-held islands, noting that the two nations used ambiguous language in the joint statement, saying that “the joint economic activities will not undermine either country’s position on a peace treaty.” During the summit meeting, the Russian side insisted that the activities should be conducted according to Russian law as the islands are part of its territory, while Japan contended that it cannot accept such an arrangement.

The papers wrote that although Abe tried to achieve a breakthrough in Japan’s territorial talks with Russia by adopting a “new approach,” he failed to produce major progress on the issue because Putin made no compromises on Russia’s claim over the sovereignty over the islands. The papers also wrote that Putin’s deep-seated distrust of the U.S.-Japan alliance was made clear, as he referred to the U.S.-Japan Security Treaty during the press conference by saying that he hopes that Japan will give consideration to Russian concerns about the U.S.-Japan alliance. Asahi speculated that Putin proposed the resumption of a 2+2 meeting with Tokyo in a bid to drive a wedge into the U.S.-Japan alliance. Nikkei wrote that Moscow is concerned about the possibility of the U.S. military’s influence in the Northern Territories because the islands are the frontline of its security in the region. Sunday’s Sankei wrote that Abe plans to promote defense cooperation with Russia, as seen in his plan to resume a 2+2 meeting, in order to check China’s growing military presence in the region.

The papers also reported on the reaction from the ruling and opposition parties as well as former Japanese residents of the islands, saying the opposition camp criticized Abe for failing to make progress in the territorial talks and the former residents expressed disappointment at the lack of progress. LDP Secretary General Nikai stated that it is necessary for the GOJ to understand that many Japanese people are disappointed with the results of the Japan-Russia summit.