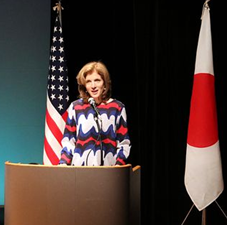 Regional editions of national newspapers, including Asahi, Mainichi, Sankei, as well as Kyodo and Jiji wire services, reported on Ambassador Kennedy’s speech in Kyoto on Saturday, during which she urged some 100 local university students to study abroad by saying: “Judging from my own experience, nothing can teach you more about yourself and the world than living abroad.” According to Asahi, recalling her first trip to the ancient Japanese city as a student decades ago, the Ambassador said: “Kyoto is a special place. I’m glad that I was able to come here before departing Japan. It’s like my hometown of Boston which is full of students.” While quoting JFK’s message that the “educated citizen must be a participant and not a spectator,” the Ambassador called on the students to travel overseas by saying: “This message applies to both U.S. and Japanese students. Your curiosity is necessary for the U.S.-Japan alliance.”

Sankei quoted her as saying: “Prime Minister Abe’s offering of flowers at Pearl Harbor will be a historic moment. It will soon be your turn to develop the alliance. Please invest your time and talent in studying abroad.” Ambassador Kennedy also mentioned bilateral relations by saying: “I am proud that U.S.-Japan relations are stronger than ever. Japan’s comprehensive security laws will enhance the efficiency of U.S.-Japan cooperation and make joint humanitarian assistance possible.” According to Jiji, the Ambassador mentioned the planned reversion of the Northern Training Area in Okinawa and stated: “The size of the land used by the U.S. military will be reduced. It will be reduced still further. This is one example of U.S.-Japan partnership.”