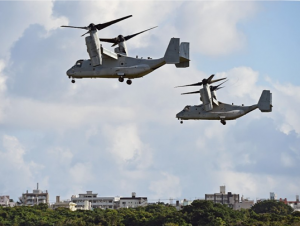 All papers reported extensively on the resumption of Futenma-based Osprey flights on Monday, only six days after what Okinawans described as the “crash” of one of the tilt-rotor planes in shallow waters in Nago City. The Japanese government consented to the resumption after receiving the U.S. military’s explanation that the mishap was not caused by a mechanical failure or structural flaws in the aircraft. After her meeting with USFJ Deputy Commander Chiarotti yesterday, Defense Minister Inada told the press that the U.S. explanation of the mishap was reasonable and consistent with the views of experts in the ministry and the SDF. However, the GOJ still asked for the continued suspension of mid-air refueling training by Ospreys for the time being. Okinawa Area Coordinator Nicholson released a comment saying that he is highly confident that Osprey flight operations can continue to be conducted safely.

According to the papers, Okinawa officials and residents were extremely upset that their calls for an indefinite flight suspension and withdrawal of the aircraft from the Futenma base were dismissed categorically. Governor Onaga told the press on Monday afternoon: “I’m frightened that the local government has been ignored by the central government. The unilateral resumption considerably undermined the relationship of trust.” He criticized the central government for not being able to make an independent decision. The papers said even local politicians who have been tolerant of the Osprey deployment at Futenma were displeased with what they called the “premature” resumption.

According to Asahi, the GOJ condoned the resumed operation sooner rather than later while taking into account such anticipated developments as the Supreme Court ruling today on the Okinawa governor’s cancellation of a landfill permit for the FRF construction, the ceremony marking the return of the Northern Training Area on Dec. 22, and Prime Minister Abe’s trip to Pearl Harbor next week. It said some GOJ officials had been sympathetic toward the U.S. desire to resume Osprey flights quickly since they understand the important role played by the tilt-rotor aircraft in maintaining regional peace and security. The Kantei reportedly gave the greenlight to the resumption out of concern that the suspension, if prolonged for weeks, might prompt incoming President Trump to say “we will leave Okinawa.”

Mainichi claimed that although DM Inada was rather cautious about the early resumption, the Kantei, Chief Cabinet Secretary Suga in particular, was confident of eventually obtaining local understanding for the resumption based on the assessment that the reduction of the security burden on Okinawa would be reduced significantly following the planned NTA return later this week. Suga has rebuffed Governor Onaga’s request for the cancelation of the reversion ceremony. The paper said some GOJ officials and LDP lawmakers are alarmed by the Kantei’s hard line toward Okinawa. DM Inada is likely to travel to Okinawa to attend the event so that she can hold discussions with local government officials on Osprey flights and other U.S. military affairs.

Asahi and Mainichi noted that the SOFA also stands in the way of Japanese probe into the accident, pointing out that the U.S. military has not replied to a request by the Japan Coast Guard for cooperation in its investigation made soon after the accident occurred last week. Mainichi also said apprehension about Osprey safety is rapidly growing in communities across Japan that are expected to host U.S. and GSDF Ospreys in the near future, including Saga Prefecture, with Governor Yamaguchi commenting on the resumption by saying: “As I’ve requested a thorough probe, I assumed the central government would respond appropriately. The early resumption was unexpected.”