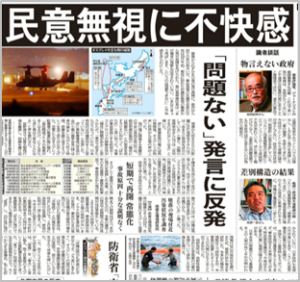 Ryukyu Shimpo and Okinawa Times devoted numerous pages about Okinawans’ angry reaction to the resumption of Osprey flights, denouncing the central government for “blindly” accepting the U.S. military’s logic for the resumption without conducting an assessment of its own. The papers claimed that condoning the U.S. military’s timeline for resumption was a “predetermined” policy on the part of the Abe administration, as some GOJ officials acknowledged the necessity of swift resumption so that the Marines can maintain readiness for a quick response to regional contingencies. Noting that Okinawans’ fear of the tilt-rotor planes was overrode by the U.S. military’s high-handed approach, Okinawa Times projected that local distrust of the central government and the U.S. military will further deepen and hence undercut the trans-Pacific alliance.