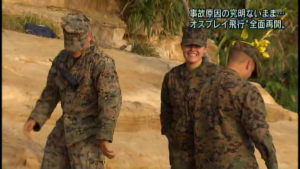 TV-Asahi’s Hodo Station took up the resumption of Osprey flights on Monday afternoon, focusing on the GOJ’s failure to have the U.S. military ground the tilt-rotor airplanes for a much longer time and the complete absence of progress on Japanese investigations into the accident on account of the SOFA. Perhaps in an attempt to remind viewers of the U.S. military enjoying privileges under the pact, the program aired footage of U.S. service members at the accident site posing for a group photo and joking with each other even though Japanese officials were prohibited from accessing the area. Former Kyodo News Managing Editor Goto speculated that the Abe administration may have chosen not to put up strong resistance to the U.S. military’s plan to resume Osprey flights quickly so as not to displease Washington ahead of the prime minister’s planned visit to Pearl Harbor next week. He also conjectured that the Marines authorities in Okinawa may be trying to take a bullish line with the upcoming inauguration of “pro-military” President Trump in mind, stressing the fact that Okinawa Area Coordinator Nicholson visited Nago City on Monday, not the day after the accident, indicated the U.S. military’s hard line. Goto also took issue with Ambassador Kennedy’s not having met with Foreign Minister Kishida until Monday evening, arguing that she should have visited the Japanese minister before the resumption of flights.