70% say no progress made on Japan-Russia negotiations on Northern Territories, Asahi poll

In an Asahi Shimbun nationwide telephone public opinion poll conducted on Dec. 17–18, respondents were split over their evaluation of the Japan-Russia summit, with 45% expressing “approval” and 41% “disapproval.” When asked whether they thought progress had been made on negotiations regarding the Northern Territories issue, some 70% said no, including both “not much progress” and “no progress.” Only 27% said that progress had been made, including both “major progress” and “some progress.”

Some 81% of respondents said that they “approve” of Prime Minister Shinzo Abe’s trip at the end of this month to Pearl Harbor in Hawaii to console the souls of the war victims.

The poll also asked respondents for their views on the recent passage of legislation that gives the green light to developing casinos in Japan. Those opposed to having casinos in Japan greatly outnumbered those in favor, 64% to 27%. Opposition is particularly strong among women at 71%. Asked if they think that integrated resorts with casinos will lead to economic growth, only 41% of respondents agreed while 51% disagreed. Meanwhile, 52% of Osakans thought integrated resorts would lead to economic growth while 45% thought otherwise. A full 75% of [all] respondents thought that Diet deliberations on the casino bill were “inadequate.” Even among cabinet supporters, 69% thought debate was “inadequate.”

Generational disparities were seen in views on the pension system reform legislation. Regarding the rules to lower pension disbursements in the event that the wages of the working-age generation decline, those in favor exceeded those opposed up through the 30s age group, whereas only about 20% of those in their 60s or above were in favor. Overall, 32% of respondents were in favor and 49% were opposed.

The poll also probed views on abdication by the emperor. When asked for their views on the expert panel’s approach of proposing to the government that abdication be limited to the current emperor, 52% said they were in favor while 36% indicated they were opposed.

[Polling methodology: The survey was conducted on Dec. 17–18 on a computer-aided random digit dialing (RDD) basis of voters nationwide with telephone calls placed by pollsters to landline and mobile phone numbers (for landlines, some districts in Fukushima Prefecture were excluded). Valid responses were received from 972 persons (out of 1,806 households found to have one or more eligible voters) for landline numbers and from 1,037 persons (out of the 2,059 persons found to be eligible voters) for mobile numbers. The valid response rates were 54% for landline numbers and 50% for mobile numbers.] 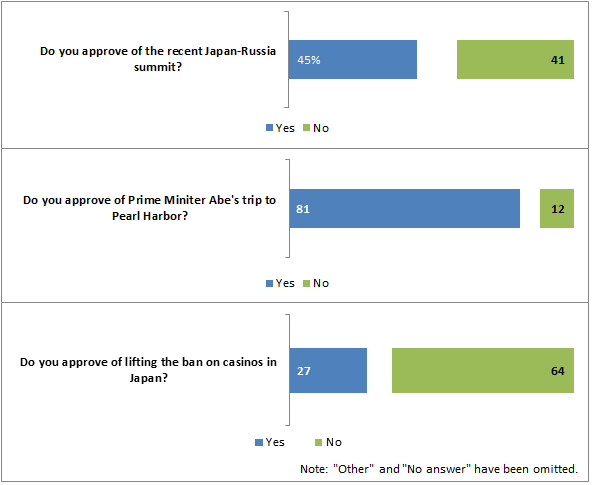 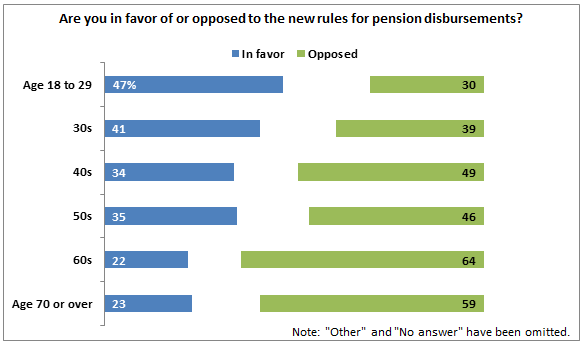