In the opinion poll jointly conducted by the Sankei Shimbun and Fuji News Network (FNN) on Dec. 17–18, some 63.9% of respondents said that they “approve” of the Japan-Russia summit. At the summit, Prime Minister Shinzo Abe and Russian President Vladimir Putin agreed to engage in joint economic activities on the four islands of the Northern Territories. Only 30.7% of respondents said they “disapprove.” A meager 26.5% of pollees said that “progress will be made” toward the resolution of the Northern Territories issue thanks to the summit, while 69% were pessimistic.

Asked if they are in favor of or opposed to the joint economic activities, those positive about the move (77.3%) greatly outnumbered those opposed (16.5%). When asked which country the summit agreement was advantageous to, 66.4% of respondents said “Russia,” 22.3% said “both countries,” and only 5% said “Japan.”

Regarding the move to develop integrated resorts (IR) equipped with casinos in Japan, those opposed easily outdistanced those in favor, 63.4% to 29.5%.

Some 47.9% said that they “approve” of the passage of the Trans-Pacific Partnership (TPP) trade pact and the related bills at the extraordinary session of the Diet, while 41% indicated disapproval.

[Polling methodology: The survey was conducted until the calculated number of responses was obtained by placing telephone calls on a random digit dialing (RDD) basis adjusted to the gender and age composition of each survey area. A total of 1,000 men and women, aged 18 and over, across the nation were surveyed. The survey was conducted on Dec. 17–18, 2016.] 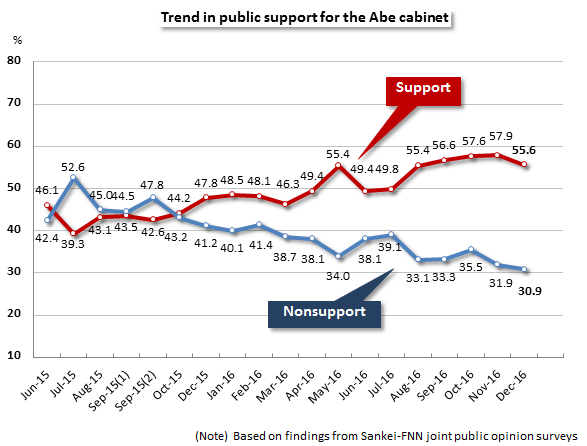 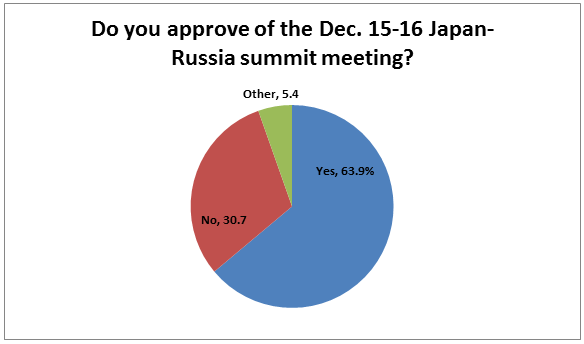 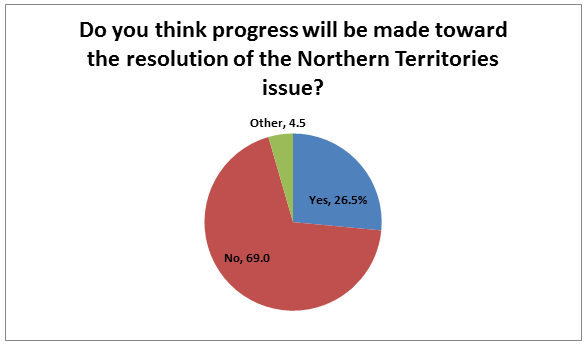