40% of both Japanese and Americans say Japan-U.S. ties “will worsen in future,” Yomiuri-Gallup poll

The Yomiuri Shimbun and the Gallup Organization, a U.S. polling company, conducted a telephone-based joint public opinion survey in Japan and the United States on Nov. 28–Dec. 4. In the survey, respondents were asked whether they think Japan-U.S. relations are currently in “good” or “bad” shape. Those responding “good” to this question stayed essentially level from the previous survey conducted in November 2015, with 57% of Japanese respondents and 48% of U.S. respondents positive about the bilateral ties (previous survey: Japan – 58%; United States – 49%). When asked about the future of Japan-U.S. ties, however, some 41% of Japanese (7%) and 40% of Americans (14%) said they “will worsen” [including both “worsen” and “worsen greatly”].

This year’s figure for “good” among pollees in Japan thus remained high, on a par with last year when it hit an all-time high since 2000 when the telephone-based survey was introduced. In contrast, those in Japan and the United States saying that the relationship “will worsen” going forward reached the highest level since 2004, although some of the phrasing of the questions and the polling methodologies differ from poll to poll. It is thought that anxiety about the future has spread as Republican Donald Trump, the U.S. president-elect, has repeatedly made statements that make light of the Japan-U.S. alliance and has said that he will withdraw his country from the Trans-Pacific Partnership (TPP) trade pact.

Regarding U.S. involvement in settling international disputes, some 19% of respondents in the U.S. said America “should engage more than ever” (previous poll: 32%) while those in the U.S. saying America “should engage less than ever” rose to 44% (36%). This suggests a trend in the United States of becoming more inward-looking, as Trump’s slogan “America first” would indicate.

When asked whether nuclear weapons are needed to deter war, 72% of respondents in Japan said “no.” Respondents in the United States were split, with 54% saying “no” and 46% indicating “yes.” 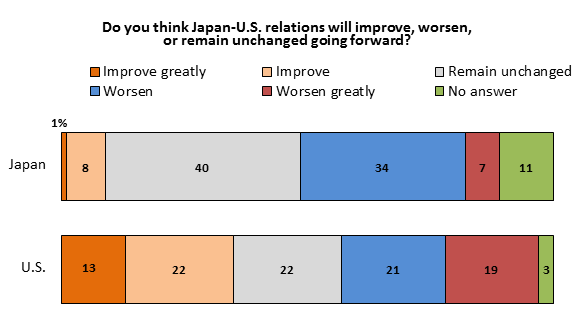