Rift opening between LDP and Komeito 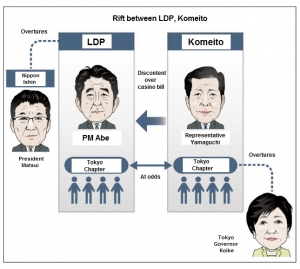 A rift is opening up between the Liberal Democratic Party and its junior coalition partner Komeito over the recent passage of the Integrated Resort (IR) bill, or so-called the casino bill. Komeito Secretary General Yoshihisa Inoue criticized the LDP on Dec. 20 for extending the current Diet session twice over the IR bill. It is unusual for a senior Komeito official to publicly criticize the LDP regarding Diet affairs. In the meantime, Tokyo Komei, the party’s chapter of the Tokyo Metropolitan Assembly, announced that it will review cooperation with its LDP counterpart in the assembly. This is because the LDP chapter objected to a review of the reward for assembly members proposed by Governor Yuriko Koike. The Komeito chapter sympathizes with Koike on the matter. Komeito is also wary of contacts between the LDP and Nippon Ishin (Japan Innovation Party). (Abridged)