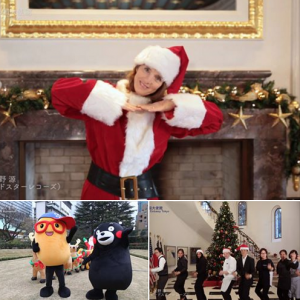 A video clip created by the U.S. Embassy Tokyo, in which Ambassador Kennedy in a Santa Claus outfit and embassy staff perform the “koi (falling in love)” dance routine aired in a popular Japanese TV comedy series, went viral after it was uploaded to YouTube on Wednesday. The video was viewed more than 2.6 million times as of 3 p.m. on Thursday. In addition to various social media, the Embassy’s video was also reported as top news on TBS’s regular evening news program “News 23” on Wednesday, and Fuji TV’s “Hodo Station” and “Tokudane!” also reported on the video on Wednesday and today. BuzzFeed interviewed Embassy Tokyo Press Officer Marrie Schaefer, who was quoted as saying: “We thought it was a wonderful opportunity to participate in Japan’s exciting pop culture, the ‘koi dance.'” She also reportedly said it was Ambassador Kennedy’s idea to wear the Santa Claus outfit, adding that the Ambassador has a good sense of humor and was enthusiastic about the video. She also reportedly said she hopes that people will get to know more about the Embassy through the video.

While there were some critical comments, such as about the timing of the video right after the Osprey incident in Okinawa, comments were overwhelmingly positive, including: “What is this…If I were to describe this video in one word, it’s ‘peace’.” Another commented: “This is incredible. Looking at this video, you never think about war. We should really be nice to each other internationally. Peace is the best.” Other messages included: “I really love America! We should continue to get along with America!”