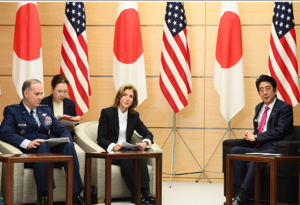 All papers reported that some 4,000 hectares of the Northern Training Area (NTA) reverted to Japan today following an official agreement sealed by the Joint Committee yesterday. Ambassador Kennedy joined Prime Minister Abe on Wednesday evening to make a formal announcement. As a result of the latest reversion, the acreage of land occupied by the U.S. military in the southernmost prefecture will be reduced by around 20%. However, the island prefecture still hosts almost 70% of all the U.S. military facilities in Japan in terms of area, down only about 4%. The vacated property will be returned to the land owners late next year at the earliest following the removal of dud shells and toxic waste.

Abe administration keen to play up partial return of NTA

Most papers wrote that the central government was eager to call attention to its achievement of significantly lessening Okinawa’s base-hosting burden, quoting PM Abe as saying: “The NTA reversion will not only reduce the base burden but also greatly contribute to local economic development through the effective use of vacated properties.” The GOJ was strongly committed to realizing the return this year and hence took a hard line by mobilizing riot policemen from other prefectures to remove opponents of construction of helipads in the belief that local residents would welcome the return. However, the recent Osprey mishap in Nago threw cold water on the administration’s festive mood. Tokyo is prepared to assist local communities in promoting tourism in the returned land by designating it a national park and obtaining UNESCO’s endorsement as a world heritage site.

The papers noted the conspicuous absence of festivity in Okinawa despite the return of the huge U.S. training field in part because the reverted property is a densely wooded area far from residential districts. The fact that new helipads were built in the remaining training area has prompted some local citizens to complain of a “greater burden” given that they will be used by the Futenma-based Ospreys, one of which recently “crashed” in shallow waters nearby. The U.S. military’s decision to resume flight training of the tilt-rotor planes less than a week after the accident, coupled with the central government’s consent for the resumption, dashed any residual optimism. In announcing his decision to boycott the reversion ceremony to be held in Nago today, Governor Onaga said on Tuesday: “It is an event that will not be attended by representatives from anywhere in Okinawa. I would like the U.S. government and people on the mainland to realize the abnormal manner of the NTA’s return.”

On Onaga’s absence from the planned ceremony, Chief Cabinet Secretary Suga expressed displeasure by telling the press yesterday: “He told me he welcomed the reversion when I personally explained the matter to him. But he retracted the remark a few days later. This is not a trivial matter.”