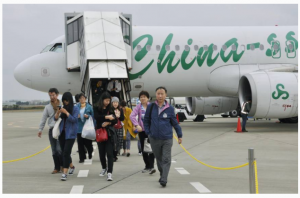 The Ministry of Land, Infrastructure, Transport and Tourism is aiming to spread the flow of foreign travelers from major cities, where it is now concentrated, to smaller cities, they said.

The ministry plans to choose the target cities in the spring or later after holding hearings with experts, according to the sources.

The government plans to secure roughly ¥1 billion ($8.48 million) in the fiscal 2017 budget for the measures, aimed at tripling the number of foreign visitors entering Japan from smaller local airports to 3 million in 2020.

The subsidies will also cover refurbishments such as setting up customs counters and making other changes to accommodate foreign visitors.

The government will cover half the costs of immigration control and customs facilities and a third of those for boarding bridges and waiting rooms.

Separately, the ministry said it will increase subsidies to most other local airports operating domestic flights to allow them to reduce landing fees by 33 to 83 percent from the current 25 to 80 percent.

In return, the government will ask airlines to reduce domestic fares to reflect the landing fee cut. The ministry is hoping that the measure would encourage foreign tourists using Tokyo’s Haneda or other major airports to visit local cities by air.