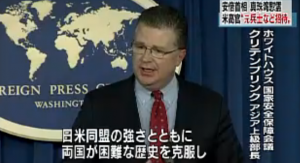 NHK reported at noon that NSC Senior Director for Asian Affairs Kritenbrink held a press conference on Wednesday in Washington, during which he announced that the USG has invited former service members who were at Pearl Harbor when it was attacked and veterans of the war in the Pacific to the venue where PM Abe and President Obama will give remarks after laying flowers at the Arizona Memorial on Dec. 27. Krintenbrink reportedly expressed hope that the two leaders will be able to interact with the survivors. He was also quoted as saying: “This event is both a demonstration of the strength of our alliance and also a powerful demonstration of how two countries can overcome a very painful history to become the closest of allies and friends.”