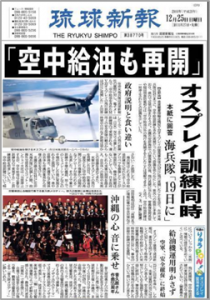 Sunday’s Ryukyu Shimpo gave prominent top coverage to a statement made to the daily in writing by USMC authorities in Okinawa that said: “Flight training for the MV-22 Ospreys, including aerial refueling, was resumed on Dec. 19.” In an email sent to the paper, the authorities also said: “All flight drills will be performed within mutually-agreed upon training zones. From the standpoint of ensuring operational security, details such as schedules are not disclosed.” The article said this explanation is incompatible with the central government’s view that the U.S. military resumed normal Osprey training last Monday except for aerial refueling. In a follow-up report, the Monday edition mentioned that  Defense Ministry officials were perplexed by the Marines’ explanation on the resumption of aerial refueling training since the Japanese side had assumed that such drills were still suspended.