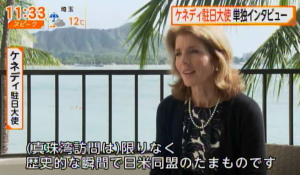 Fuji TV reported at noon on its interview with Ambassador Kennedy in Honolulu, during which the Ambassador said PM Abe’s visit to Pearl Harbor is an “incredibly historic moment” and “a great tribute to the U.S.-Japan alliance.” She also reportedly said the visit demonstrates “the power of reconciliation” and that “rebuilding trust and friendship” leads to reducing conflict in the world. The network said the Ambassador is expected to accompany President Obama and Prime Minister Abe when they visit Pearl Harbor tomorrow. Concerning President Obama’s historic visit to Hiroshima, the Ambassador was quoted as saying: “The welcome he received from the Japanese people is something that he will never ever forget. It was a great honor for me just to be there.” Asked if she has any advice for her successor, she reportedly said: “Never go to sleep because there are so many wonderful things to do in Japan. Twenty-four hours a day you could be having the greatest experience of your whole life.” To the question would she stay in her post if asked, she said she would love to keep working for U.S.-Japan relations because she loves Japan but  does not think that will happen.