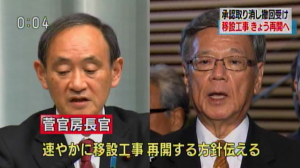 NHK reported this afternoon that Chief Cabinet Secretary Suga met with Okinawa Governor Onaga at the Kantei this morning and told him that the GOJ will swiftly resume the relocation work in Henoko following Onaga’s withdrawal of his rescindment of his predecessor’s approval for the landfill work in Henoko. According to the network, Governor Onaga told Suga: “There have been no proper discussions on the matter. In view of its relationship of trust with Okinawa Prefecture, I would like the GOJ to hold prior discussions.” Onaga also told Suga that he will continue to use every power he possesses to thwart the relocation work, saying: “If the government is asking us to understand its position, I would like to ask the government to understand Okinawa’s position. Okinawa has no choice but to take a hard line.” Suga reportedly responded by saying that the government “is making the necessary preparations for resuming the relocation work.” According to the network, Suga also told reporters: “Relocating the base to waters off Henoko is the only solution and we will proceed with the plan.”